I have imported a .glTF model of an aircraft. The 'console' shows 'error loading modeldef.xml file'.

You can ignore that warning about modeldef.xml not being found when you are importing a MSFS glTF file. You only need that when you import or export for FSX and P3D.

Thanks Arno I thought that it wasn't a problem but added it just in case.
I am more concerned about the strange display and perhaps it has something to do with the fact that it is an fully animated flyable aircraft as I can import it into Blender (see below with all those thin black lines and also strange texture beneath it) although it displays there strangely too (I have permission from the author to (try to) convert it to a static model which I am trying to do) and compare that to what it looks like in FGS2020 (name on tail not in Blender and green paint does not extend to front of nose) - maybe not the correct forum to work that out

That funny cone I see coming down from the aircraft, was that made in Blender or is that an artifact from converting with MCX?

Did you go from MDL to glTF and then into Blender?

Hi Arno,
I attempted to import the glTF for the original model into Blender but got an error something like "this version doesn't support dds" and so then imported the glTF from original model into MCX.
I have since 'googled' Blender DDS and got some things on forums which led to believe that perhaps there are versions of Blender which do support dds and so just now downloaded the latest version of Blender but will sintall that one and see if it will import the original model tomorrow - getting too late here in Sydney

You could also use ModelConverterX to do the material conversion for you.

MSFS glTF files have a couple of MSFS specific optimizations, I don't think Blender will be able to read these correctly. For example the normals and texture coordinates are stored in a non-standard way.

Hi Jarnold,
For this "works", you can use Blender 2.93.x (https://download.blender.org/release) and the exporter from FlyByWire : https://github.com/flybywiresim/msfs2blender2msfs/tree/rewrite
This plugin import your gLTF model but you should then set up all materials with your PNG.

After your modifications you save your Blender file and open it with Blender 2.83.x (https://download.blender.org/release) and Vitus's plugin installed (https://github.com/tml1024/Blender2MSFS2).
To conclude then export to MSFS.

I had already used MCX to convert the DDS image files to PNG - I exported the image files and model to another folder and then opened the glTF model using Blender as my version of Blender would not open DDS files.

I have now downloaded Blender 2.93 and installed the MSFS glTF importer (I had never seen that addon before and only ever used Import > glTF 2.0). I cannot import ANY model using it as it always reports
could not handle mesh "partnnn" for every mesh part in the model.

Wouldn't Arno's MCX be good enough to do that anyway?


Maybe its time to 'throw in the towel' as they say. It looks weird when imported into MCX and also looks weird when I import the 'version' created from MCX export (with PNG images) as you can see in the images a
bove.
Last edited: 13 Oct 2021

I think you're at the point of sharing the source files with Arno or someone else to untangle the problem. MCX should be able to do what you need without Blender, I think.

I don't think MCX is the best tool to do this: to make a static object from a flying model. In the past there was SAMM2 but I don't think it works on glTF.
The cylinder that appears under the plane is I think due to an error of interpretation of the plugin: it is not perfect and MCX has also the same problem.

According to the description of Jgarnold, I think it is Bagolu's MOD which started from Asobo's 172SP and modified it into a seaplane.

I have just made the test with Blender 2.93 + FBW plugin and indeed we have errors.

1 - So I started again with MCX, I imported the glTF then I activated the wireframe mode and with the Object Hierachy editor, I isolated the cylinder under the plane that I have deleted it.
2 - After saving this result in a glTF format, I tried again to import this new gLTF with Blender 2.93+ FBW plugin and I got the model WITH all animations. 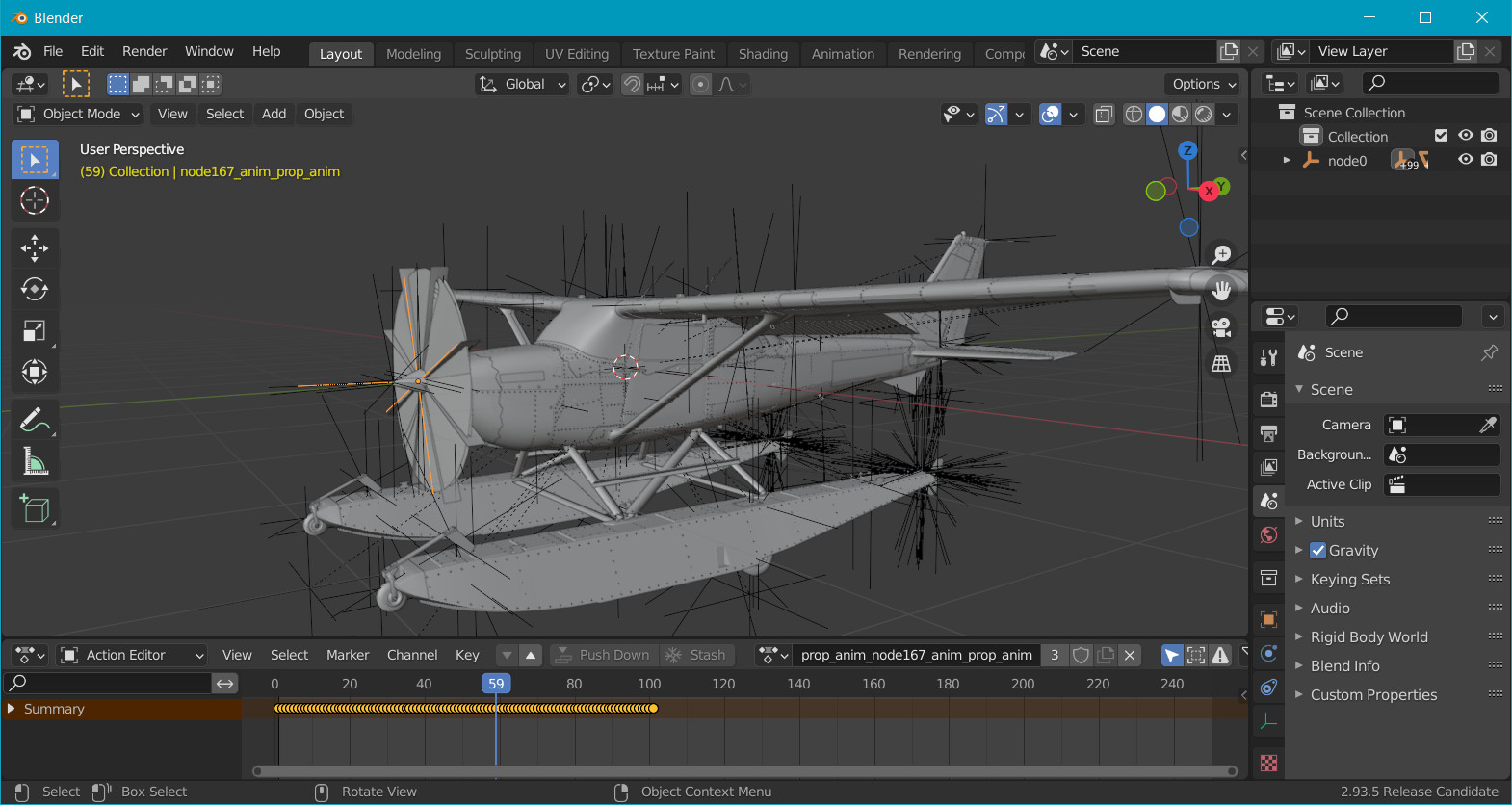 In the past with some 3D models, I have had yet this error and I think these artifacts are either due to the plugin used to compile the model (perhaps FBW export function) or a later modification of gltf to obfuscate it
Still, this manipulation I have just indicated is perfectly usable and works for the desired purpose.

You can delete the offending part in MCX:

Then save the model as straight glTF or MSFS gltf (according to the Exporter options).

Thanks Dick (especially for showing me the Heirachy editor which I have never 'explored before) and Didier for his expert input.
Yes the C172 amphibian model is from Bagolu and available at https://flightsim.to/file/15805/cessna-172-amphibian - it states "This is a plane patch over Asobo's Skyhawk and adds a new plane to your hangar (located at the begining : letter C... like Cessna)" so maybe that is the 'problem'. Regardless I am now wondering even though Bagolu gave me permission to create a static model it would be governed by Asobo's rules (https://www.xbox.com/en-US/developers/rules).

[added later] I now think that FS2020 aircraft models are 'difficult' to load. I have imported the DASH 8 (available here) from both directly from the download and also from the entry in the community folder using Blender and the model displayed (without any textures) is a Citation CJ4 which looks nothing like a Dash 8. I also imported it into MCX and it also does not look correct there either. I also imported my ATR72 into Blender and MCX and they both display a Citation CJ4 for that aircraft too. I don't even have a Citation CJ4 on my system. Maybe its time to forget about this (throw in the towel).

I have been able to manually remove that (vertical) cylinder and also also the thin black lines in the form of a crosses and which I think might be associated with animations (of the flyable version) by selecting each one (LMB) and Delete as I can also remove them using the (Blender) collections panel and looking for nodes with animations attached and removing those node which also removes the thin black lines.

That doesn't worry me (although time consuming) but what does is that the textures are all over the place. For example the texture on the nose does not extend to the front and you can see that in the image from Didier where there is a 'riggly' line around the nose where the color texture stops and then there is none on the front of the nose. Also on the top of the wing there are problems with the display of the texture. If only I could work out how to get the textures to cover the aircraft as they should. You can see what I mean with the image I posted earlier of the green variant of the aircraft. You can also see this 'problem' in MCX -

Do those represent a frost material? If so you might be able to delete those parts.

rhumbaflappy said:
Do those represent a frost material? If so you might be able to delete those parts.
Click to expand...

I have seen that on other models as well. Maybe I need to add a feature to hide certain parts or types of materials in the preview.
G

(2) questions on a closely-related issue involving the MCX feature set under consideration here:

Do MSFS glTF 3D models utilize "Smoothing Groups", and if so, is there also a way to suppress that display ?

Additionally, is there a way to automatically or semi-automatically remove via ex: MCX ModelPart Heirarchy Editor, what, IIUC, is the underlying original source 'aliased' 3D model surfaces used to form the "Smoothing Group" surfaces, that (in FSX / P3D MDLs at least) 'bleed through' the "Smoothed" surface from underneath as 'flickering' surfaces in MCX (and other 3D modeling applications) after converting / deriving aircraft for use as high-resolution static- or fixed-mooring (but animated for "floating") ...scenery objects ?

Thanks in advance for your clarification of what may be done now or in the future with this aspect of deriving scenery object aircraft from original fully animated user-pilot-able aircraft / SimObject aircraft.

No, neither mdl files nor MSFS uses smoothing groups. The models contain normal vectors that determine their rendering.

Sorry, but this was discussed in other threads, and is likely best not pursued further in this particular thread.

Detailed explanations of "retopology" in 3D models, implications of retention during import / export via MCX, and run time rendering by FS are cited here:


However, the 'Flickering' surfaces issue above, is not a result of (only) the Sketchup "Smooth Coplanar" feature.


I have discovered that plugin mistakenly reverses Textures on many imported, Triangulated *.OBJ surfaces

AFAIK, the anomalies I previously saw was a result of aircraft MDLs imported by MCX, exported as *.OBJ with PNG Textures, then being imported to Sketchup via "TIG: Import OBJ with Textures" plugin.

That plugin apparently was mistakenly reversing Material orientation of many (but not all) Triangulated derived surfaces.


IIRC, both sets of surfaces were visible in the 3D model in Sketchup after exported by MCX and imported to Sketchup.

PS: I did not see the same result if I imported the aircraft using ASSIMP-based "Samuel T: Universal Importer" plugin


But, via that plugin, the same aircraft *.OBJ 3D model displays in Sketchup with transparent Material attributes on exterior surfaces.

Thanks. I didn't know about 'frost' on models. YES it is frost (see below) and so I selected MSFS Geo Decal Frosted to remove it. GREAT. However now I find that this model has over 200000 faces which probably could affect FPS

Regarding loading the DASH8 and seeing a Citation CJ4 displayed I notice that the files in the model folder are prefixed with CJ4. And I think that screwed up my community folder as when I removed the DASH8 FS2020 crashed when I attempted to change aircraft - I have sorted that one out since.