I searched here with no results found and also online as well as reading the MS ESP Special Effects 34 page handout. No luck either. I have created complex special effects bgl's with Controllers in my scenery to play sounds for military bases on a clock at exact times. A lot of work but it was worth it. NOW, I would like to have that kind of sound aboard an ai naval ship. Is it possible and how. Not just play a sound like an engine when its running but announcement wav's at specific times; ships bells at specific times etc. Waiting to hear from the experts who have helped me with so many other things here.

I've been working with AI ships for a few years now, but unfortunately I don't know of any script that can trigger effects time-controlled - if I could use something like that very well.

The only possibility I can think of right now is to create the sound file for the desired time period (for example with Audacity).

For example, if you want the ship's bell to ring every 2 hours, you create a sound file with a runtime of 2 hours. At the very beginning you position the bell sound and leave the rest of the 2 hours empty. In the loop the ship bell should sound once every 2 hours.

What if you create a controller to trigger all of your effects? Or just place the effects individually. Each effect could be set to go off at desired time of day.

effectParams= The parameters of the effect. For example, the following effect will appear at midnight on January 1st every year and exist for 20 minutes:
<Effect effectName="fx_ForestFire" effectParams="MOY=01,01;DOM=01,01;HOD=00,00;MOH=00,20;"/>
Click to expand...

I know exactly how to do that for a scenery item. An AI carrier is not a scenery item so therefore you do not have a scenery folder to put the controller in. I created that type for both of my military airports for the proper bugle call or announcement throughout the entire day including varying it by the seasons to the proper sunrise and sunset. I did that for an aircraft carrier that was a bgl. static scenery item. AI carriers are MDLs don't work that way but thank you for trying to help.
G

Have you tried putting the Fx Controller code in an AttachPoint on the AI SimObject MDL ?

IIRC, Christian Bahr has a worked example of a timed sound which runs from a Fx Controller on a MDL AttachPoint somewhere; I'll post a link tomorrow.

no I haven't I'll look for your post and thank you for taking the time to help.
G

Here's the link to the post by Christian Bahr with a a worked example of a timed sound which runs from a Fx Controller on a MDL AttachPoint:

Alternatively, assuming your AI Traffic SimObject was coded to never move - or not move very far- one could create a separate 3D scenery object that is fully transparent (or perhaps non-textured ?) and use a sound *.Fx with a large trigger 'Radius' via a AttachPoint on that object MDL as a static scenery library object placed nearby via BGLComp.


My example for placing Christian Bahr's sound *.Fx as a scenery object without using an AttachPoint is here:

Unfortunately, this really does NOT help because AICarriers ships start and continually move even for hundreds of miles. The effect has to be attached to an MDL NOT a scenery of BGLs. As I said I am quite experienced in creating the fx effects for adding to scenery. If you download and examine them from my NAS Alameda posted in Sim Outhouse I did extensive work successfully for the air station; a stationary aircraft carrier scenery object and the scenery playing sounds for a departing aircraft carrier attached to the scenery object. Did all of this before. I have not had anyone tell me how to attach an effect to an MDL that can be controlled to turn on/off at specific times. Even Klaus can't get the deck lights to do that. Still open to help.
G

Aside from legacy format 3D models coded in SCASM / ASM, 3D objects in FSX / P3D utilize a MDL file, and whether a static scenery object or dynamic user pilotable / multi-player / AI / Ground vehicle object is involved, it will contain a MDL.

AFAIK, all MDLs may have AttachPoints to which various other objects (including *.Fx files) might be 'attached'.

It was based on the assumption that that you may be ready / willing / able to use ex: Arno's ModelConverterX (aka "MCX") Attached Object Editor feature to 'attach' a *.Fx file to an AttachPoint, that I first linked you to Christian Bahr's worked example of how one can do this.

I hope this info pointing out that, aside from legacy format SCASM / ASM objects, all 3D models in FSX / P3D are "MDLs" ...might ultimately prove comprehensible to you.

If it does not, perhaps someone else here will be kind enough to provide you with an individualized worked example of how to do this using a MDL from an "AI Carrier ship" (...provided you first tell them exactly which AI Carrier ship 'model' you are currently wanting to do this with).

thank you for taking so much time with this post to help. At the present, I am away from the aicarriers but when I get back to it I will get one of my effects with a controller from NAS Alameda where I know it works with scenery carriers and try to attach it with MDCx to my aicarrier and see what happens as far as being triggered to an exact time.

Resource contributor
You know about the default carrier effects, the steam, the blast shield, correct? It seems easy enough to substitute any effect sound, for the steam. Granted, your klaxon or whatever is triggered by shft+U, but you can change that and have your sound triggered by a controller. 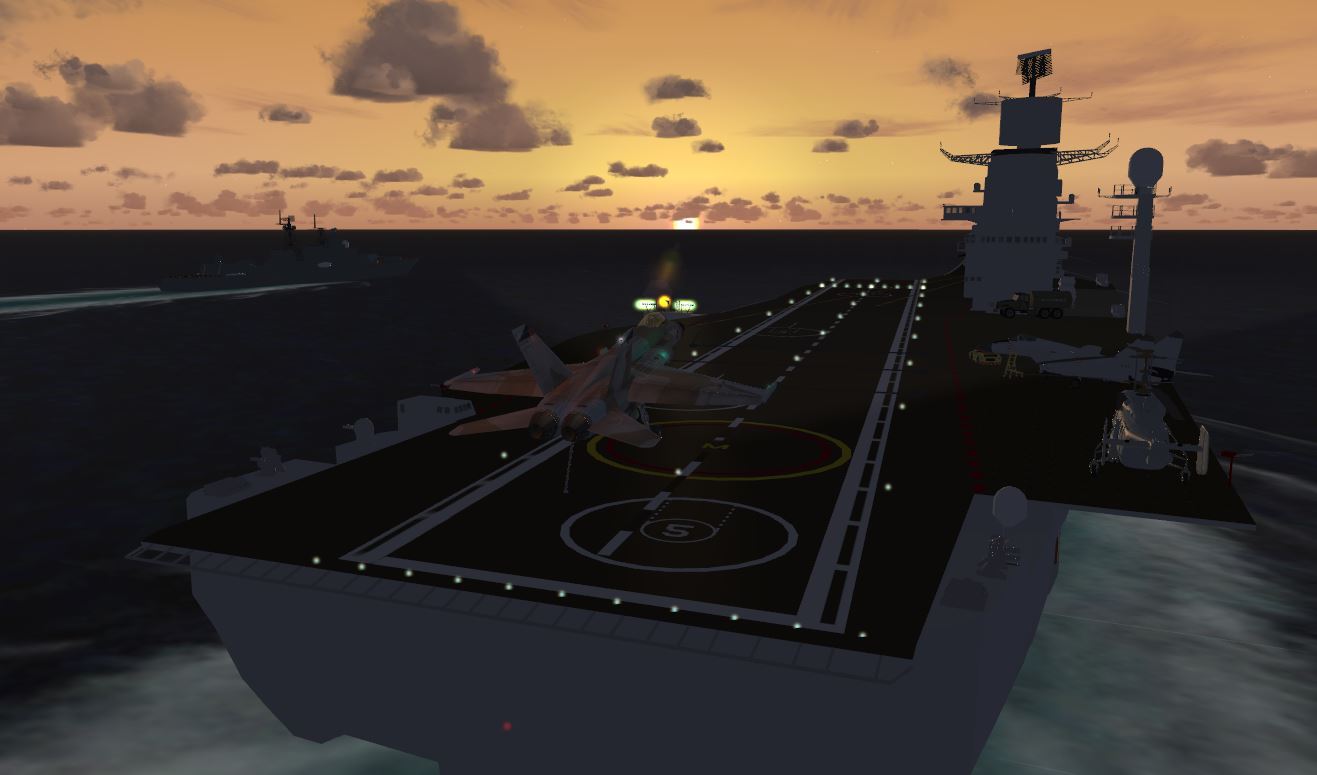 I already tried that when I found sound in some ai battleships but it didn't work. I have found that not all fx effects work when attached in MDCx even though they appear that they will. I haven't really looked at this for a while but i may revisit it tomorrow. I will see if I can make it work and post results one way or the other here.

Resource contributor
Sound in ai battleships? MSFS provided a few direct paths to learning the SDK, through "easter eggs" and tutorials, like the DC-3 and the Enterprise. They practically beg us to modify these objects and they give examples of how to. Using these clues, I have extensively reworked default models and default processes and added them to mine and other peoples' models. Successfully matching the default IFLOLS effect and cables to the Vik is one example. In fact, I am absolutely certain you can substitute different effects, including sounds, because I've done it myself. I have edited and attached sounds to ai models in commercial releases. The link is to a development video that demonstrates issues between the software module and my applied ai sound. The issue was resolved and the addon has been published.
I don't know about any ai battleships with sound, certainly no default ones. Your procedure is less than vague, so I can't comment on that.

MCX doesn't do anything on it's own, aside from allowing us to modify models, without learning as much as previous developers needed to know, before beginning. Almost every functionality of MCX comes from the SDK, Arno has added some image manipulation, some collatibility, a lot of cool little features, actually, but MCX doesn't do anything the original MSFS dev team couldn't do without MCX and there is nothing MCX can do to a model, that a developer could not do independently, using the tools already provided in the SDK. In short, MCX is a macros, it is a GUI to call tools that already exist. Given the above, this make little sense to me:

tgycgijoes said:
I have found that not all fx effects work when attached in MDCx even though they appear that they will.
Click to expand...

However, I have found that not all developers are ready to accept advice, even though they appear that they will.